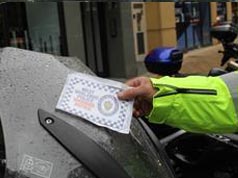 Article Source: http://mcia.co.uk/ Following an increase in the theft of powered two wheelers (PTWs) from Birmingham City Centre during the early part of the summer, a ‘lock it or lose it’ campaign is proving to be working. The campaign is being delivered by West Midlands Police, in partnership with the Motorcycle Industry Association’s MASTER Security … END_OF_DOCUMENT_TOKEN_TO_BE_REPLACED